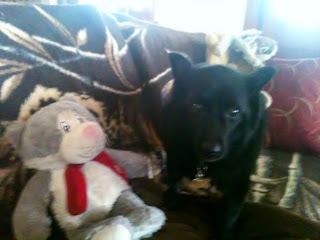 George is gone.  Becoming part of our family at six-weeks old, after 13 years and five-plus months, he left last Friday morning at 4:30.

At night when I lie down knowing that I must sleep in case I wake up and have to go to work, mournful sighs seep out of the part of me where George used to live.  For a long moment, I thought of hanging myself, maybe somewhere near our landlord's appliance-train in the northeastern corner of our backyard.  This morning, I scanned the yard for an easily accessible stout tree, then remembered -- I live in an urban desert.

Frankly, something about the choices and options of how to end a life seem limited, at best.   As with most parts of life, the less money you have, your do-in-yourself options barely exist.  I mean...walk in front of a bus, jump off a bridge.  That's pretty much it for the poor folks.

You'd think when it came to the end of one's life choice that God might demonstrate a flash of equitable charity -- all same in the end?  Equal at the end -- one swift shared moment.

Rhetorically, we catch ourselves often saying, "I know how you feel..."   I think it's possible that we might know how a person really feels, yet I'm fully aware of the impossibility of actually knowing. When surrendering to my daydreams in the middle of the night, I like to amuse myself:  I think of the possibility of everyone's "last" feeling being the same, precisely the same.  It would be the sole opportunity to be certain that we know how someone else "feels."

One bona fide collective experience felt in a singular way.  It seems like God might opt to do something propicious in that singular last gasp.  Finally a single truth, an exclusive experience -- a universally shared intimacy, at the end.

It's like there's something stuck in my throat. It tastes like sadness.
Posted by A Thorn Among Many at 8:18 PM 2 comments:

She was born a twin in '35 in a feather bed in a white frame house west of the tracks in a town where we all grew up. At home in the blazing heat and thick humidity of a Texas August, my grandmother was expecting a single birth, but the doctor said "Miz Travis , there's another one a comin'" and my mom was born. She was a quiet girl, often abused with a razor strap when my grandfather felt it necessary. She was a fair-skinned freckle-faced red-head with an athletc build and a great high school basketball player. When she was 16, she married my dad and they began life together in that same little town, in a little green house just east of those same tracks. Dad was a machinist and mama got pregnant with her first child. Her first pregnancy ended in miscarriage and my folks didn't waste much time before she was pregnant again. And so there was mama's first born, Billy Tom. Daddy had gone to work at Swift Meat Packing knocking cattle in the head with a sledgehammer and Mama was busy being a good mother. About a year later, she was pregnant again only to have another miscarriage. Then a year and half-later, I was born -- followed by another brother, Michael Jack, a couple of years after.

It was 1961 in the sweltering heat of a Texas August, I was almost five, and another brother, Wendell Robert had arrived, but this time it was different. Flipping through a journal, I found this entry from December 16, 1994. The previous day I had been riding on a bus from Denver to Boulder reading a poem, The Colors of Mourning, by Nora Mitchell and my heart's mind was flooded with memories of mama, my good mother in '61.

16 Dec. 1994
Yesterday I wept several times as I recalled Mama in Aug. '61. Wendell had passed away and been buried and Mama never went to his funeral. I was reading Nora Mitchell's poem, The Colors of Mourning, and the fuscia night gown that Mama wandered around in following Wendell's passing came flashing to me. I had recently turned five and helplessly watched as she moved zombie-like from room to room in the white frame house on Ruby Street -- the house we rented from Uncle Jack and Aunt Margie. Daddy is almost absent from my memory during this time. She continued to wander through the house, rarely stopping to rest -- as she floated from room to room, she was like a fuscia colored bird with a bright red crown searching for a yearling that had mysteriously disappeared. Mama was overwhelmed with grief and my need to rescue her from the sorrow that stole who she was -- haunted me even today, 33 years later.

My father and the Dr. didn't think Mama should or could endure the lowering of the cheap, paste-board death box -- Wendell's final home -- quite a contrast to the warm and secure womb of my good mother. Did Daddy know or did he think or did Dr. Garnett wonder how denying Mama Wendell's last rites would haunt her for so many years?

Twenty-three years later in 1984, when Mama's eldest, Billy Tom was crushed like a coke can in a red Pontiac Firebird by a drunk driver  --- she called me in San Francisco, I was then 32 -- she wanted to borrow $300 from me -- the 5 year old that mourned with her through both losses. She needed the money to buy a funeral plot next to where Tom had just been buried, and so she bought a resting place beside him to relocate Wendell. It was then in '84, twenty-three years later that Mama was allowed the time and place to mourn Wendell's passing.

It was as she watched the grave diggers dig into the burnt-crimson clay of Bourland Cemetery, finally reaching scattered portions of the dilapidated casket, she was told that the yellowed-white tiny baby bracelet -- H-A-R-R-I-S
M-E-T-H-O-D-I-S-T   H-O-S-P-I-T-A-L was still intact.


Swallowing the bite of peanut butter sandwich she brought along for the exhumation -- she felt a deep sigh -- a release from the depths of her soul -- where only hurt lives and nothing else is invited. It took a double-dose of pain -- all those years later -- loss of two parts of herself, her sons, before she could feel resolve in the loss of a son she never knew.

My mom now lives with my Dad, her life-partner of almost 60 years, a few miles from that town where it all happened. My mama, the Good Mother, now lives with Alzheimer's. We talk often and I miss her deeply. A few weeks ago while visiting on the phone my mama, the Good Mother said, "I don't know what it feels like when you're dying -- I've never died before".
Posted by A Thorn Among Many at 3:18 PM 2 comments:

Well....I thought I was ready

Let's see....it was only about three months ago when I made my first blog post and ended it with this big promise of "here it comes....I'm ready."   Sometimes parts of us are ready, when other parts aren't rarin' to go.

I suppose the biggest reason I haven't posted anything is the same as before the first post -- not sure what to write about, fear of criticism, what's the purpose of the blog -- all that stuff and maybe more.

One day before Christmas a year ago, I got up in the middle of the night and ventured out to the living room.  My two faithful companions George and Grace, quietly followed from the bedroom leaving my partner, Craige, deep in a sound sleep as he usually is in the middle of the night.  I wondered out into the sky-light moon lit room doing my best to avoid thigh-high couch corners and coffee table-top edges that often attack my knees.

I plugged in the Christmas tree lights and settled in with my babies -- hoping to find answers.  I grabbed a red spiral notebook, its "spiral part" filled with signs of torn out pages, and looked for a wise pen -- one that would give me answers.

Well...shortly after my first blog post in late November, and about a year since that pre-Christmas night, I found that journal entry.  It too, had been ripped from it's original spiral home -- it had moved in with some other pages of a green spiral notebook -- just living between some other pages, like it was just there temporarily.

12/19/09  3:10 a.m.
Chronic cough, sleepless nights, achy joints, hands, feet, knees, arms, over weight, confused, without direction, aimless, stressed, saddened by family, out of work since early September.  No health care, can't fit into clothes -- they're all worn out anyway.  Christmas tree lights glow softly in the dark with candle burning.  Grace and George --the faithful -- up with me always day or night.  So many years, so little change.  Mom and Dad didn't end up the way they'd hoped or at least the way I'd hoped they would be at this time in their lives.  I suppose they feel the same about me.  Why is Christmas the way it is?  Working or not....it's just a big stress.  Less a stress now -- it just comes and goes like everything else.  Except for the outside influence of the mostly nameless, I'd probably never know that it came and went.  At least Craige puts up the Christmas tree and in the darkness, its simplicity warms the room and gives my heart some warm respite.

Well, one day not long after that night, while I was waitin' on somebody to knock on my front door and tell me where my life was headed -- I heard a voice from within say "What are you waiting for?"
Posted by A Thorn Among Many at 9:06 PM 5 comments:

Was I born a thorn?

Was I born a thorn? I always thought I was who God made me to be, yet being loved was something I often daydreamed. Simply by being who I felt I was, I was a thorn...a thorn to many, but maybe among many? I exhibited "unacceptable" traits, asked "inappropriate" questions, and made decisions that most felt were "wrong". I created this blog's title months ago, listed my favorite blog reads, people that inspire me with their brand of wisdom. I finally agreed with myself about some kind of biographical info. Yet, I never posted anything...kept waiting for someone to tell me what to say. This morning while praying to God...once again, I heard "What are you waiting for?" I don't think the question was about the blog, but maybe this thorn has been quiet, too quiet. And so...it begins
Posted by A Thorn Among Many at 3:00 PM 5 comments:

How It All Started...

A Thorn Among Many
Population 827--that's what the sign said as you entered Keller, Texas, my hometown. The people were white, the coffee weak and the mediocre football team important. My parents and grandparents grew up there too, amidst the bigotry and gossip, and it's of that human soil that I grew. And thank God...that was just the beginning.